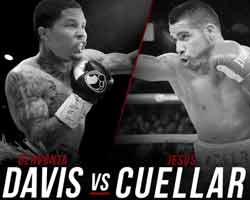 Review by AllTheBestFights.com: 2018-04-21, good fight between Gervonta Davis and Jesus Cuellar: it gets three stars.

The undefeated former Ibf super-Fw champion Gervonta Davis entered this fight with a perfect boxing record of 19-0-0 (18 KOs=95%) and he is ranked as the No.5 lightweight in the world. He fought three times last year winning over Jose Pedraza (Pedraza vs Davis), Liam Walsh (Davis vs Walsh) and Francisco Fonseca (Gervonta Davis vs Francisco Fonseca).
His opponent, the former Wba Fw champion Jesus Marcelo Andres Cuellar, has an official record of 28-2-0 (21 KOs=75%) but he is not ranked as he hasn’t fought since December 10, 2016 when he was defeated by Abner Mares via split decision (Jesus Cuellar vs Abner Mares). Before this bout, in 2015, he had beat Vic Darchinyan (Cuellar vs Darchinyan) and Jonathan Oquendo (Cuellar vs Oquendo). Davis vs Cuellar is valid for the WBA Super World super featherweight title; undercard of Adrien Broner vs Jessie Vargas. Watch the video and rate this fight!