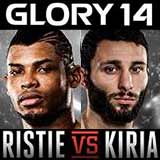 Review: 2014-03-08, great fight with four knockdowns and a spectacular finish: Andy Ristie vs Davit Kiria gets three stars. Andy Ristie entered this fight with a pro kickboxing record of 44-3-1 and he is ranked as the No.1 super welterweight in the world, he comes off five consecutive wins, having lost his last fight to Andy Souwer in 2012 (=Souwer vs Ristie), last year Ristie won the Glory lightweight title beating Giorgio Petrosyan in the semifinal (=Petrosyan vs Ristie) and Robin van Roosmalen in the final (=Roosmalen vs Ristie).
His opponent, Davit Kiria, has an official record of 21-9-0 and he entered as the No.4 in the same weight class, last year he fought three times losing only his last fight against Robin van Roosmalen (=Roosmalen vs Kiria). Ristie vs Kiria is valid for the Glory lightweight title (Ristie’s first defense) and it is on the undercard of Mirko “Cro Cop” Filipovic vs Remy Bonjasky 2 – Glory 14. Watch the video and rate this fight!

(Free embeddable video hosted on Dailymotion and not uploaded by AllTheBestFights, to report it please visit this link where the video is hosted)