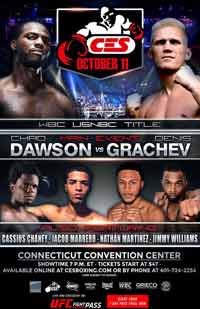 Review by AllTheBestFights.com: 2019-10-11, some good exchanges between Chad Dawson and Denis Grachev but it is not enough to gt three stars: it gets two.

The former Wbc, Ibf and Ibo light-Hw champion Chad Dawson entered this fight with a professional record of 35-5-0 (19 knockouts) and he is ranked as the No.21 light heavyweight in the world. He was defeated by Andrzej Fonfara in 2017 (Andrzej Fonfara vs Chad Dawson) but he came back to win in 2019 with Quinton Rankin.
His opponent, Denis Grachev, has a boxing record of 19-8-1 (10 knockouts) and he entered as the No.84 in the same weight class. He has already fought four times in 2019 winning the first three bouts but then he has lost with Charles Foster. Dawson vs Grachev is valid for the vacant WBC United States (USNBC) light heavyweight title. Watch the video and rate this fight!