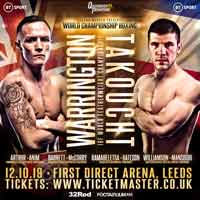 Review by AllTheBestFights.com: 2019-10-12, pretty good fight between Josh Warrington and Sofiane Takoucht: it gets three stars.

The undefeated Ibf Fw champion Josh Warrington entered this fight with a perfect record of 29-0-0 (6 knockouts) and he is ranked as the No.3 featherweight in the world (currently the #1 in this division is Leo Santa Cruz). In his last three fights he has beat Lee Selby (Lee Selby vs Josh Warrington), Carl Frampton (Josh Warrington vs Carl Frampton) and Kid Galahad (Josh Warrington vs Kid Galahad).
His opponent, Sofiane Takoucht, has an official boxing record of 35-3-1 (13 knockouts) and he entered as the No.130 in the same weight class. He suffered his last loss when he faced Alexander Miskirtchian in 2014 (via majority decision, Alexander Miskirtchian vs Sofiane Takoucht 2), since then he has won eight consecutive bouts defeating Yesner Talavera in 2019. Warrington vs Takoucht is valid for the IBF World featherweight title (Warrington’s third defense). Watch the video and rate this fight!