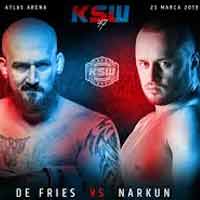 Review by AllTheBestFights.com: 2019-03-23, some good exchanges between Philip De Fries and Tomasz Narkun but it is not enough to get three stars: it gets two.

The Ksw Hw champion Philip De Fries entered this fight with a professional kickboxing record of 16-6-0 (87% finishing rate) and he is ranked as the No.33 heavyweight in the world. He lost to Ivan Shtyrkov in 2017 but then he has won four bouts beating Michal Andryszak and Karol Bedorf last year (Philip De Fries vs Karol Bedorf).
His opponent, the black belt in Brazilian jiu-jitsu, former M-1 Global and current Ksw light-Hw champion Tomasz Narkun, has an official record of 16-2-0 (94% finishing rate) and he entered as the No.8 light heavyweight. He lost to Goran Reljic in 2014 but then he has won seven bouts defeating Mamed Khalidov twice in 2018 (Mamed Khalidov vs Tomasz Narkun I and Tomasz Narkun vs Mamed Khalidov 2). De Fries vs Narkun, main event of Ksw 47, is valid for the KSW heavyweight title (De Fries’ second defense); they also faced each other a second time on April 24, 2021 (Philip De Fries vs Tomasz Narkun 2). Watch the video and rate this fight!