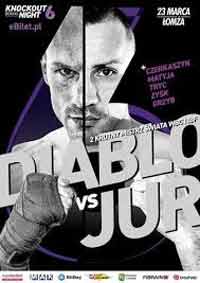 Review by AllTheBestFights.com: 2019-03-23, fight not particularly good between Krzysztof Wlodarczyk and Alexandru Jur: it gets two stars.

The former Ibf and Wbc Cw champion Krzysztof Wlodarczyk entered this fight with a pro boxing record of 56-4-1 (39 knockouts) and he is ranked as the No.15 cruiserweight in the world. ‘Diablo’ lost to Murat Gassiev in 2017 (Murat Gassiev vs Krzysztof Wlodarczyk) but then he has won three fights beating Al Sands in his last one (Krzysztof Wlodarczyk vs Al Sands).
His opponent, Alexandru Jur, has a record of 18-2-0 (7 knockouts) and he entered as the No.46 in the same weight class. He fought three times last year defeating Jean Jacques Olivier and Giorgi Tevdorashvili but between these two fights he lost to Dmitry Kudryashov. Wlodarczyk vs Jur is the main event of the evening. Watch the video and rate this fight!