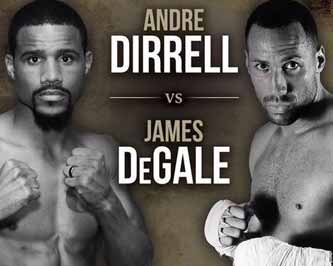 Review by AllTheBestFights.com: 2015-05-23, close and pretty good fight between Andre Dirrell and James DeGale: it gets three stars.

The 2008 Olympic middleweight gold medalist James DeGale entered this fight with a professional boxing record of 20-1-0 (14 knockouts) and he is ranked as the No.3 super middleweight in the world (currently the #1 in this division is Carl Froch). He suffered his only defeat, via majority decision, in 2011 when he faced George Groves (=Groves vs DeGale), since then he has won ten consecutive bouts beating Marco Antonio Periban in his last fight (=DeGale vs Periban).
His opponent, Andre Dirrell, has an official record of 24-1-0 (16 knockouts) and he entered as the No.10 in the same weight class. He lost to Carl Froch in 2009 but since then he has collected six victories defeating Derek Edwards in his last bout (=Dirrell vs Edwards). DeGale vs Dirrell is valid for the vacant IBF World super middleweight title. Watch the video and rate this fight!