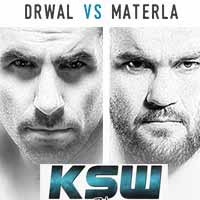 Review by AllTheBestFights.com: 2015-05-23, pretty good fight between Michal Materla and Tomasz Drwal: it gets three stars.

Michal Materla entered this fight with a professional mma record of 21-4-0 (71% finishing rate) and he is ranked as the No.24 middleweight in the world. He suffered his last defeat in 2013 when he faced Jay Silva in their rematch (=Materla vs Silva 2), but after this bout he has taken revenge on the Brazilian (=Materla vs Silva 3) and then he has won over Jorge Luis Bezerra (=Materla vs Bezerra).
His opponent, Tomasz Drwal, has an official record of 21-4-1 (86% finishing rate) and he entered as the No.44 in the same weight class. He lost two consecutive bouts in 2010, against Rousimar Palhares and David Branch, so he was released by the Ufc; since then he has won four fights beating Delson Heleno in his last one. Materla vs Drwal, main event of KSW 31, is valid for the KSW middleweight title (Materla’s fourth defense). Watch the video and rate this fight!