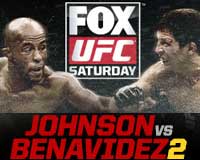 Review: 2013-12-14, good start and spectacular finish: the second fight between Demetrious Johnson and Joseph Benavidez gets three stars. Demetrious Johnson (18-2-1, 56% finishing rate) entered as the No.1 flyweight in the world while Joseph Benavidez (19-3-0, 74% finishing rate) entered as the No.2. In their first fight Johnson defeated Benavidez by split decision (September 22, 2012); also this second fight is valid for the UFC flyweight title (Johnson’s third defense) and it is the main event of UFC on Fox 9. Watch the video!