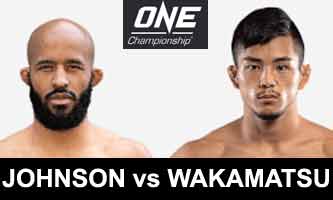 The former Ufc Flw champion Demetrious Johnson entered this fight with a mma record of 27-3-1 (59% finishing rate) and he is ranked as the No.2 flyweight in the world but he comes off the loss against current #1 Henry Cejudo (via split decision, Demetrious Johnson vs Henry Cejudo 2); before this bout, in 2017, he had defeated Wilson Reis (Johnson vs Reis) and Ray Borg (Demetrious Johnson vs Ray Borg).
His opponent, Yuya Wakamatsu, has an official record of 10-3-0 (90% ko/tko victory rate – he has never won via submission) but he lost two out of his last three fights, against Senzo Ikeda and Danny Kingad; between these two fights he beat Mamoru Yamaguchi. Johnson vs Wakamatsu is the quarter-final of the One Fc flyweight world grand prix tournament: undercard of Eduard Folayang vs Shinya Aoki 2 – ONE FC 93. Watch the video and rate this fight!