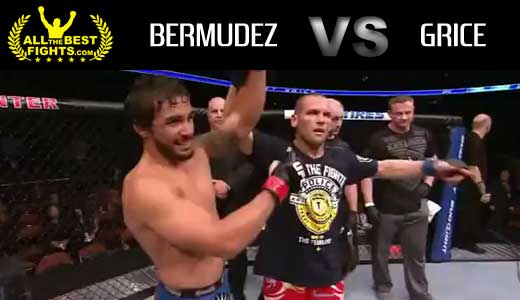 Review: 2013-02-23, impressive performance by both Dennis Bermudez and Matt Grice: tremendous and tough exchanges, one knockdown and high pace; only in the central part of the bout the pace slows down but thanks to an amazing third period (candidate for round of the year), the UFC Fight of the Night is one of best fights of the year 2013, five stars! Dennis Bermudez (9-3-0) entered as the No.87 featherweight in the world while Matt Grice (15-4-0) entered as the No.79. Bermudez vs Grice is on the undercard of Ronda Rousey vs Liz Carmouche – UFC 157. Watch the video!

Video: (This is a free embeddable highlights video hosted on Youtube and it was not uploaded by AllTheBestFights, to report it please visit this link where the video is hosted)