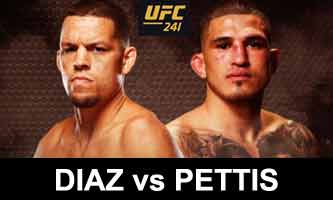 Review by AllTheBestFights.com: 2019-08-17, good fight between Anthony Pettis and Nate Diaz: it gets three stars.

The black belt in tae-kwon-do, Bjj and former Ufc Lw champion Anthony Pettis entered this fight with a pro mma record of 22-8-0 (82% finishing rate) and he is ranked as the No.6 welterweight in the world (currently the #1 in this division is Kamaru Usman). He lost to Tony Ferguson last year (Tony Ferguson vs Anthony Pettis) but he came back to win against Stephen Thompson in 2019 (Stephen Thompson vs Anthony Pettis).
His opponent, the black belt in Brazilian jiu-jitsu and Tuf 5 Lw tournament winner Nate Diaz, has a record of 19-11-0 (84% finishing rate) but he is not ranked as he hasn’t fought since 2016 when he faced twice Conor McGregor: Diaz won the first bout (Conor McGregor vs Nate Diaz I) but then he lost the rematch (Nate Diaz vs Conor McGregor II). Pettis vs Diaz is on the undercard of Daniel Cormier vs Stipe Miocic 2 – UFC 241. Watch the video and rate this fight!