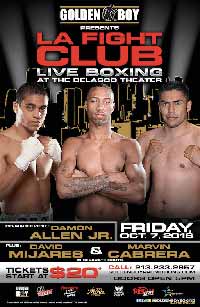 Review by AllTheBestFights.com: 2016-10-07, fight not particularly exciting between Diego Magdaleno and Art Hovhannisyan: it gets two stars.

Diego Magdaleno entered this fight with a pro boxing record of 28-2-0 (12 knockouts) and he is ranked as the No.31 lightweight in the world. He fought twice last year beating Jose A Gonzalez (=Magdaleno vs Gonzalez) and losing to Terry Flanagan (=Flanagan vs Magdaleno).
His opponent, Art Hovhannisyan, has a record of 17-2-3 (9 knockouts) but his last victory occurred in 2014 when he faced Miguel Zuniga, after this fight he was defeated by Jonathan Maicelo and he drew with Fidel Maldonado Jr. Magdaleno vs Hovhannisyan is the main event of the evening. Watch the video and rate this fight!