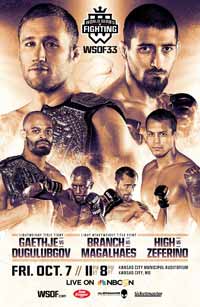 Review by AllTheBestFights.com: 2016-10-07, good fight between David Branch and Vinny Magalhaes: it gets three stars.

The black belt in Brazilian jiu-jitsu former Wsof Mw and current Wsof light-Hw champion David Branch entered this fight with a pro mma record of 18-3-0 (61% finishing rate) and he is ranked as the No.13 middleweight in the world. He suffered his last loss when he faced Anthony Johnson in 2012 (=Johnson vs Branch), since then he has won eight consecutive bouts beating Clifford Starks in 2016 (=Branch vs Starks).
His opponent, the former M-1 Global light-Hw champion Vinny Magalhaes (black belt in Bjj as well), has a record of 14-7-0 (93% finishing rate) and he entered as the No.22 in the same weight class. He suffered two consecutive defeats in 2013, against Phil Davis (=Davis vs Magalhaes) and Anthony Perosh, but then he has won four bouts beating Jake Heun in 2016 (=Magalhaes vs Heun). Branch vs Magalhaes is valid for the WSOF light heavyweight title (Branch’s second defense) and it was on the undercard of Justin Gaethje vs Ozzy Dugulubgov but the main event was cancelled as Dugulubgov was stricken with an illness – WSOF 33. Watch the video and rate this fight!