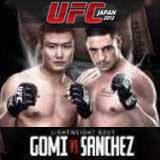 Review: 2013-03-03, fight not particularly exciting between Sanchez and Gomi; two stars. Diego Sanchez (23-5-0) entered as the No.23 welterweight in the world while Takanori Gomi (34-8-0) entered as the No.28 lightweight (158 lbs catchweight fight because Sanchez failed to make the lightweight limit). Sanchez vs Gomi is on the undercard of Wanderlei Silva vs Brian Stann – UFC on Fuel TV 8. Watch the video!

(This is a free embeddable highlights video hosted on Youtube)