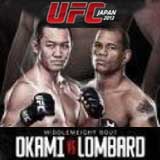 Review: 2013-03-03, two stars for the first two rounds, and three stars for the third frame: so Lombard vs Okami gets only two. Hector Lombard (32-3-1) entered as the No.6 middleweight in the world while Yushin Okami (28-7-0) entered as the No.7. Lombard vs Okami is on the undercard of Wanderlei Silva vs Brian Stann – UFC on Fuel TV 8. Watch the video!