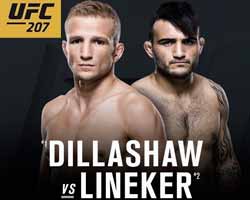 Review by AllTheBestFights.com: 2016-12-30, good fight between TJ Dillashaw and John Lineker: it gets three stars.

The former Ufc Bw champion TJ Dillashaw entered this fight with a mma record of 13-3-0 (69% finishing rate) and he is ranked as the No.2 bantamweight in the world. He has fought twice in 2016 losing to #1 current Ufc Bw champion Dominick Cruz (=Dillashaw vs Cruz) and beating Raphael Assuncao (=Dillashaw vs Assuncao 2).
His opponent, John Lineker, has an official record of 29-7-0 (59% finishing rate) and he entered as the No.5 in the same weight class. He suffered his last loss when he faced Ali Bagautinov in 2014 (=Lineker vs Bagautinov), since then he has collected six consecutive victories defeating Michael McDonald (=McDonald vs Lineker) and John Dodson in his last two (=Lineker vs Dodson). Dillashaw vs Lineker is on the undercard of Amanda Nunes vs Ronda Rousey – UFC 207. Watch the video and rate this fight!