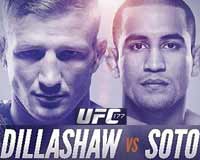 Review: 2014-08-30, some good exchanges and a nice finish: TJ Dillashaw vs Joe Soto gets three stars (UFC Performance of the Night). TJ Dillashaw entered this fight with a professional mma record of 10-2-0 (70% finishing rate) and he is ranked as the No.1 bantamweight in the world, he suffered his last defeat at the end of 2013 when he faced Raphael Assuncao (=Assuncao vs Dillashaw), but he came back to win in 2014 defeating Mike Easton in January (=Dillashaw vs Easton) and he managed to beat the former Ufc Bw champion Renan Barao in May (=Barao vs Dillashaw I).
His opponent, the former Bellator Fw champion Joe Soto, has an official record of 15-2-0 (86% finishing rate) and he entered as the No.33 in the same weight class, he replaces Renan ‘Barao’ Pegado who has forced to withdraw from the bout the day of the weigh-ins since he went to the hospital as a result of his attempts to cut weight; Soto comes off six consecutive wins and he makes hid Ufc debut in this bout. Dillashaw vs Soto, main event of Ufc 177, is valid for the UFC bantamweight title (Dillashaw’s fisrt defense). Watch the video and rate this fight!