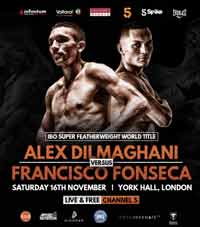 Review by AllTheBestFights.com: 2019-11-16, nice toe-to-toe fight between Alex Dilmaghani and Francisco Fonseca: it gets three stars.

Alex Dilmaghani entered this fight with a record of 19-1-0 (8 knockouts) and he is ranked as the No.47 super featherweight in the world. He suffered his only loss when he faced Mickey Coveney in 2011, since then he has collected one no-contest and 14 victories beating Martin Parlagi in 2019.
His opponent, Francisco Fonseca, has a boxing record of 25-2-1 (19 KOs=76%) and he entered as the No.26 in the same weight class. He lost to Tevin Farmer last year (Tevin Farmer vs Francisco Fonseca) but then he has won over Stanley Mendez, Robin Zamora and David Bency. Dilmaghani vs Fonseca is valid for the vacant IBO World super featherweight title. Watch the video and rate this fight!