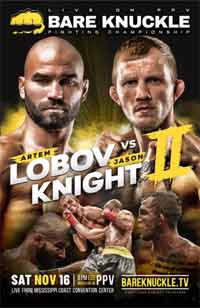 Review by AllTheBestFights.com: 2019-11-16, fight not so exciting between Artem Lobov and Jason Knight 2: it gets two stars.

The former Ufc fighter Artem Lobov entered this fight with a bare knuckle record of 2-0-0 (but he has a mma record of 13-15-1 – 46% finishing rate). In his last two bouts he has beat Jason Knight (in their first fight, Artem Lobov vs Jason Knight I) and Paulie Malignaggi (Paulie Malignaggi vs Artem Lobov).
His opponent, Jason Knight (he also fought for the Ufc), has a bare knuckle record of 0-1-0 (but he has an official mma record of 20-6-0 – 80% finishing rate). Before losing to Lobov in April he had also lost four consecutive bouts in mma, the last one with Jordan Rinaldi. Lobov vs Knight 2 is the main event of BKFC 9 (Bare Knuckle Fighting Championship, organization in which “fighters are not allowed to wrap their hands to within one-inch of the knuckle”). Watch the video and rate this fight!