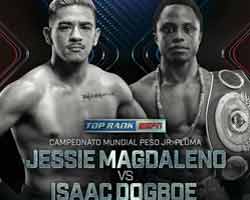 Review by AllTheBestFights.com: 2018-04-28, nice and tough fight between Jessie Magdaleno and Isaac Dogboe: it gets three stars.

The undefeated Wbo super-Bw champion Jessie Magdaleno entered this fight with a perfect boxing record of 25-0-0 (18 knockouts) but he is not ranked as he hasn’t fought since April 22, 2017 when he defeated Adeilson Dos Santos (Jessie Magdaleno vs Adeilson Dos Santos); before this bout, in 2016, he had won over Rey Perez and Nonito Donaire (Donaire vs Magdaleno).
His opponent, the Olympian and interim Wbo super-Bw champion Isaac Dogboe, has an official record of 18-0-0 (12 knockouts) and he entered as the No.6 super bantamweight in the world. In his last three fights he has won over Julian Evaristo Aristule, Javier Nicolas Chacon and Cesar Juarez (Isaac Dogboe vs Cesar Juarez). Dogboe vs Magdaleno is valid for the WBO World super bantamweight title. Watch the video and rate this fight!

(Free embeddable video hosted on Youtube and not uploaded by AllTheBestFights)
https://www.youtube.com/watch?v=R2tMkdtypoQ