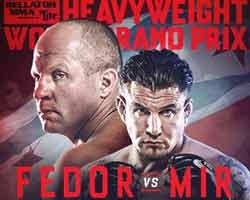 Review by AllTheBestFights.com: 2018-04-28, pretty good fight between Fedor Emelianenko and Frank Mir: it gets three stars.

The 41-year-old former Pride, world combat sambo champion and black belt in judo Fedor Emelianenko entered this fight with a professional mma record of 36-5-0 (75% finishing rate) and he is ranked as the No.53 heavyweight in the world. ‘The Last Emperor’ fought just three times since 2012 beating Singh Jaideep (Fedor Emelianenko vs Singh Jaideep) and Fabio Maldonado (mma Fight of the Year candidate, Fedor vs Maldonado) but then he lost to Matt Mitrione in 2017 (Fedor Emelianenko vs Matt Mitrione).
His opponent, the black belt in karate, Brazilian jiu-jitsu and former Ufc Hw champion Frank Mir, has an official record of 18-11-0 (78% finishing rate) but he is not ranked as he hasn’t fought since March 20, 2016 when he was defeated by Mark Hunt (Mark Hunt vs Frank Mir). Before this bout, in 2015, he had fought three times winning over ‘Bigfoot’ Silva (Silva vs Mir) and Todd Duffee (4-stars-fight, Mir vs Duffee) but then he lost to Andrei Arlovski (Arlovski vs Mir). Fedor vs Mir, main event of Bellator 198, is the quarterfinal of the Bellator Heavyweight World Grand Prix Tournament. Watch the video and rate this fight!