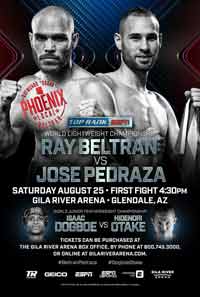 Review by AllTheBestFights.com: 2018-08-25, good start between Isaac Dogboe and Hidenori Otake: it gets three stars.

The former Olympian and current undefeated Wbo super-Bw champion Isaac Dogboe entered this fight with a perfect record of 19-0-0 (13 knockouts) and he is ranked as the No.2 super bantamweight in the world (currently the #1 in this division is Luis Nery). In his last three fights he has won over Javier Nicolas Chacon, Cesar Juarez (Isaac Dogboe vs Cesar Juarez) and Jessie Magdaleno (Jessie Magdaleno vs Isaac Dogboe).
His opponent, Hidenori Otake, has a boxing record of 31-2-3 (14 knockouts) and he entered as the No.16 in the same weight class. He suffered his last loss when he faced Scott Quigg in 2014 (Scott Quigg vs Hidenori Otake), since then he has won nine consecutive bouts beating Brian Lobetania in 2018. Dogboe vs Otake is valid for the WBO World super bantamweight title; undercard of Raymundo Beltran vs Jose Pedraza. Watch the video and rate this fight!

(Free embeddable video hosted on Dailymotion and not uploaded by AllTheBestFights)
https://www.dailymotion.com/video/x6smiov