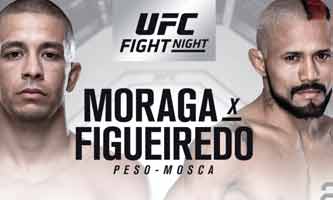 Review by AllTheBestFights.com: 2018-08-25, pretty good finish between John Moraga and Deiveson Figueiredo: it gets three stars.

John Moraga entered this fight with a mma record of 19-6-0 (58% finishing rate) and he is ranked as the No.8 flyweight in the world (currently the #1 in this division is Henry Cejudo). He lost three consecutive bouts between 2015 and 2017, the last one with Sergio Pettis (Pettis vs Moraga), but then he has won over Ashkan Mokhtarian, Magomed Bibulatov (Magomed Bibulatov vs John Moraga) and Wilson Reis (John Moraga vs Wilson Reis).
His opponent, the undefeated Deiveson Figueiredo, has a perfect record of 14-0-0 (86% finishing rate) and he entered as the No.13 in the same weight class. In his last three bouts ‘Daico’ Figueiredo has beat Marco Beltran, Jarred Brooks (Figueiredo vs Brooks) and Joseph Morales (Deiveson Figueiredo vs Joseph Morales). Moraga vs Figueiredo is on the undercard of Justin Gaethje vs James Vick – UFC Fight Night 135. Watch the video and rate this fight!

(Free embeddable video hosted on Youtube and not uploaded by AllTheBestFights)
https://www.youtube.com/watch?v=JYAJqf3KZhY