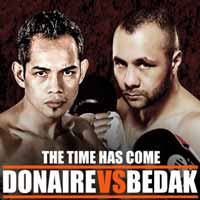 Review by AllTheBestFights.com: 2016-04-23, fight not particularly good between Nonito Donaire and Zsolt Bedak: it gets two stars.

The Wbo super-Bw champion (he has won world titles in five different weight classes) Nonito Donaire entered this fight with a pro boxing record of 36-3-0 (23 knockouts) and he is ranked as the No.4 super bantamweight in the world (currently the #1 in this division is Carl Frampton). He suffered his last loss when he faced Nicholas Walters in 2014 (=Donaire vs Walters), after this bout he has won three fights beating Cesar Juarez in his last one (4-stars-fight, Donaire vs Juarez).
His opponent, Zsolt Bedak, has an official record of 25-1-0 (8 knockouts) and he entered as the No.66 in the same weight class. His only loss occurred when he faced Wilfredo Vazquez Jr in 2010, since then he has won ten consecutive bouts. Donaire vs Bedak is valid for the WBO World super bantamweight title (Donaire’s first defense). Watch the video and rate this fight!