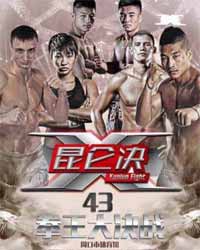 Review by AllTheBestFights.com: 2016-04-23, fight not so exciting between Artur Kyshenko and Murthel Groenhart: it gets two stars.

The 2015 Kunlun Fight world champion Artur Kyshenko entered this fight with a professional kickboxing record of 66-13-1 (36 knockouts) and he is ranked as the No.2 light heavyweight in the world. He suffered his last loss when he faced Karapet Karapetyan in 2014, since then he has won ten consecutive bouts beating Dmitry Valent in his last one.
His opponent, the 2012 K-1 World Max champion Murthel Groenhart, has an official record of 60-21-3 (33 knockouts) and he entered as the No.3 in the same weight class. He lost two consecutive fights between 2015 and 2016, against #1 Nieky Holzken (=Holzken vs Groenhart 2) and Cedric Doumbe (=Groenhart vs Doumbe), but then he came back to win against Marco Pique and Sem Braan. In their first fight Kyshenko lost to Groenhart by ko (December 15, 2012 – Kyshenko vs Groenhart I); this second bout is the main event of the Kunlun Fight 43. Watch the video and rate this fight!