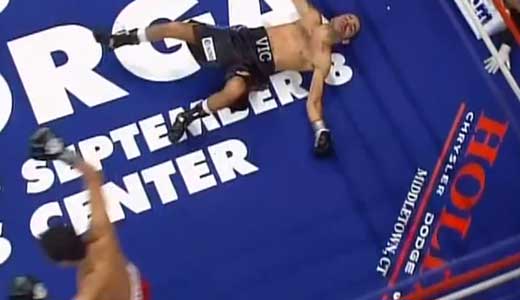 Review: 2007-07-07, Vic Darchinyan was still undefeated and was the reigning champion of the IBF and IBO flyweight titles while Nonito Donaire was at his first attempt for a world title. The fight starts with a good pace with both boxers throwing power punches and at the end of the fourth round Press scored a majority draw but the Filipino Donaire strikes “Raging Bull” Darchinyan with a perfect left hook during the fifth and the match is over! Donaire vs Darchinyan was awarded as the “Knockout of the Year” of 2007 (by The Ring magazine). Vic Darchinyan entered the fight with a record of 28-0-0 while “The Filipino Flash” Nonito Donaire had a record of 17-1-0 (they also faced a second time on November 9, 2013: Donaire vs Darchinyan 2). Watch the video!