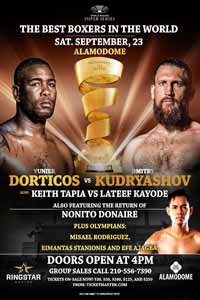 Review by AllTheBestFights.com: 2017-09-23, fight not particularly good between Nonito Donaire and Garcia Hernandez: it gets two stars.

The former world champion in three different weight classes Nonito Donaire entered this fight with a pro boxing record of 37-4-0 (24 knockouts) and he is ranked as the No.10 featherweight in the world (currently the #1 in this division is Leo Santa Cruz). He fought twice last year beating Zsolt Bedak (=Donaire vs Bedak) and losing to Jessie Magdaleno (controversial decision, Donaire vs Magdaleno).
His opponent, Ruben Garcia Hernandez, has a record of 22-2-1 (9 knockouts) and he also lost once in 2016, against Randy Caballero (=Caballero vs Garcia); after this bout he has won seven consecutive fights. Nonito Donaire vs Hernandez is valid for the vacant WBC Silver Featherweight title; undercard of Yunier Dorticos vs Dmitry Kudryashov. Watch the video and rate this fight!