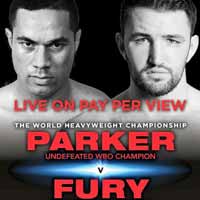 Review by AllTheBestFights.com: 2017-09-23, disappointing fight between Joseph Parker and Hughie Fury: it gets two stars.

Both undefeated, the Wbo Hw champion Joseph Parker entered this fight with a perfect boxing record of 23-0-0 (18 KOs=78%) and he is ranked as the No.6 heavyweight in the world (currently the #1 in this division is Anthony Joshua) while his opponent, Hughie Fury (Tyson Fury’s cousin), has an official record of 20-0-0 (10 knockouts). Parker won the vacant Wbo heavyweight title last year against Andy Ruiz Jr (=Parker vs Ruiz Jr) and he successfully defended it once in 2017 with Razvan Cojanu (=Parker vs Cojanu) while Fury is not ranked as he hasn’t fought since April 30, 2016 when he defeated Fred Kassi (=Fury vs Kassi); before this bout he had also won over Dominick Guinn. Hughie Fury vs Joseph Parker is valid for the WBO World heavyweight title (Parker’s second defense). Watch the video and rate this fight!