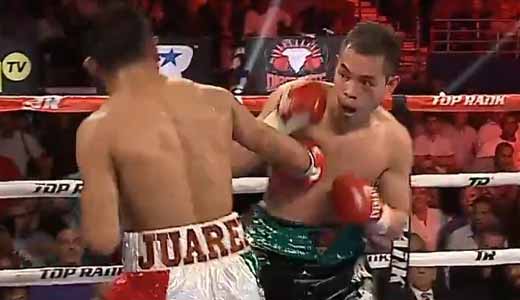 Review by AllTheBestFights.com: 2015-12-11, great performance by both boxers with some wild exchanges in the second part of the fight: Nonito Donaire vs Cesar Juarez was a war and after watching the bout a second time we think it is one of the best boxing fights of the year 2015 and it gets four stars!

The former world champion in five different weight classes Nonito Donaire entered this fight with a professional boxing record of 35-3-0 (23 knockouts) and he is ranked as the No.4 super bantamweight in the world (currently the #1 in this division is Carl Frampton). He lost to Nicholas Walters in 2014 (=Donaire vs Walters) but he came back to win in 2015 beating William Prado (=Donaire vs Prado) and Anthony Settoul (=Donaire vs Settoul).
His opponent, Cesar Juarez, has an official record of 17-3-0 (13 KOs=76%) and he entered as the No.19 in the same weight class. He suffered his last defeat in 2013, against Hugo Partida, but then he has won four consecutive fights, the last one against Juan Carlos Sanchez Jr (=Sanchez Jr vs Juarez). Donaire vs Juarez is valid for the vacant WBO World super bantamweight title; undercard of Felix Verdejo vs Josenilson Dos Santos. Watch the video and rate this fight!