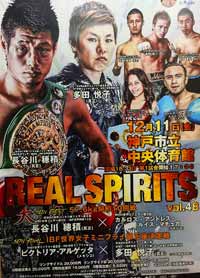 Review by AllTheBestFights.com: 2015-12-11, fight not particularly good between Hozumi Hasegawa and Carlos Ruiz Machuca: it gets two stars.

The former Wbc Bw and Fw champion Hozumi Hasegawa entered this fight with a professional boxing record of 34-5-0 (15 knockouts) and he is ranked as the No.21 featherweight in the world. He lost to Kiko Martinez last year (4-stars-fight, Martinez vs Hasegawa) but he came back to win in 2015 beating Horacio Garcia (=Hasegawa vs Garcia).
His opponent, Carlos Andres Ruiz Machuca, has an official record of 14-1-0 (5 knockouts) and he entered as the No.61 in the same weight class. He also lost in 2014, but against Francisco Rojo, and he has won over Raul Horacio Centeno in 2015. Hasegawa vs Ruiz Machuca is on the undercard of Etsuko Tada vs Kareli Lopez. Watch the video and rate this fight!