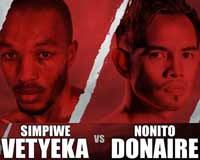 Review: 2014-05-31, pretty good fight but disappointing finish, we hope to see a rematch: Nonito Donaire vs Simpiwe Vetyeka gets three stars. Nonito Donaire entered this fight with a professional boxing record of 32-2-0 (21 knockouts) and he is ranked as the No.1 featherweight in the world, he has won world titles in three different weight classes but last year he suffered his second defeat when he faced the undefeated Cuban Guillermo Rigondeaux (Donaire vs Rigondeaux) so he moved up in weight class to the Fw division and he beat Vic Darchinyan in their rematch (=Donaire vs Darchinyan 2) after six years from their first bout (The Ring magazine Knockout of the Year 2007: Donaire vs Darchinyan I).
His opponent, Simpiwe Vetyeka, has an official record of 26-2-0 (16 knockouts) and he entered as the No.3 in the same weight class, he has won world titles in two different weight classes and in his last bout he managed to beat then-undefeated Chris John winning the WBA Fw belt (=John vs Vetyeka). Donaire vs Vetyeka is valid for the WBA Super World featherweight title (Vetyeka’s first defense), first world title shot in the Fw division for ‘The Filipino Flash’ Donaire. Watch the video and rate this fight!