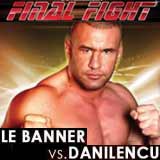 Review: 2014-05-30, pretty good fight between Jerome Le Banner and Lucian Danilencu: it gets three stars. Jerome Le Banner entered this fight with a professional kickboxing record of 77-22-2 (62 KOs=80%) and he is ranked as the No.12 heavyweight in the world, he fought five times in 2013 losing only his last about against Sergei Kharitonov (=Le Banner vs Kharitonov).
His opponent, the 28-year-old Lucian Danilencu (13 years younger than Le Banner), has a record of 30-10-2 (16 knockouts), he lost three out of three bouts last year but he came back to victory in 2014 defeating Ryou Todaka (in a fight valid for the ISKA World Hw title) and Luca Pantò. Le Banner vs Danilencu is the main event of “Final Fight: Retour aux Sources”. Watch the video and rate this fight!