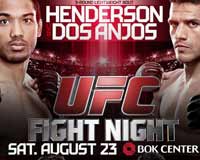 Review: 2014-08-23, pretTy good fight with some nice combinations: Benson Henderson vs Rafael dos Anjos gets threes tars (UFC Performance of the Night). The balck belt in Taekwondo and Bjj Benson Henderson entered this fight with a professional mma record of 21-3-0 (52% finishing rate) and he is ranked as the No.3 lightweight in the world, he lost the Ufc Lw belt at the end of 2013 when he faced for the second time #1 Anthony Pettis (=Henderson vs Pettis 2); after this bout he came back to victory in 2014 beating Josh Thomson (=Henderson vs Thomson) and Rustam Khabilov (=Henderson vs Khabilov).
His opponent, Rafael dos Anjos, black belt in Brazilian jiu-jitsu as well, has an official record of 21-7-0 (52% finishing rate) and he entered as the No.7 in the same weight class, he suffered his last defeat in his first bout of 2014 when he faced Khabib Nurmagomedov (=dos Anjos vs Nurmagomedov), but he won his next fight against dos Anjos vs High). Henderson vs dos Anjos is the main event of the UFC Fight Night 49. Watch the video and rate this fight!

(Free highlights video hosted at this page on Facebook)