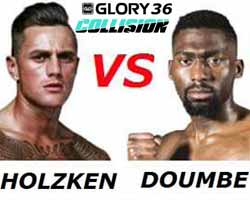 The Glory Ww champion Nieky Holzken entered this fight with a pro record of 90-11-0 (56 knockouts) and he is ranked as the No.1 super middleweight in the world. He suffered his last defeat when he faced L’houcine Ouzgni in 2012, since then he has collected eleven consecutive victories winning the Glory Ww tournament in 2013, beating Joseph Valtellini in the final (=Valtellini vs Holzken), and defeating Yoann Kongolo (=Nieky Holzken vs Yoann Kongolo) and Murthel Groenhart in 2016 (=Holzken vs Groenhart 3).
His opponent, the WAKO Pro and former WKA world champion Cedric Doumbe, has an official kickboxing record of 64-5-1 (39 knockouts) and he entered as the No.4 in the same weight class. He has already fought 11 times in 2016 losing just to Fang Bian in January, after this bout he has won nine consecutive fights beating Murthel Groenhart in March (=Groenhart vs Doumbe) and Vedat Hoduk in his last one. Holzken vs Doumbe is valid for the Glory welterweight title; undercard of Rico Verhoeven vs Badr Hari – Glory 36 Collision. Watch the video and rate this fight!