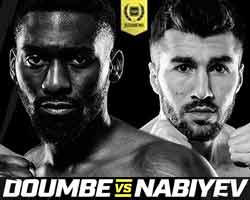 Review by AllTheBestFights.com: 2018-03-03, fight not so exciting between Cedric Doumbe and Alim Nabiyev: it gets two stars.

The former Glory Ww and WAKO Pro Mw champion Cedric Doumbe entered this fight with a pro kickboxing record of 68-6-1 (39 knockouts) and he is ranked as the No.2 super middleweight in the world. He fought four times last year losing once, with Murthel Groenhart in their rematch (Doumbe vs Groenhart II) but then he beat Yohan Lidon (Cedric Doumbe vs Yohan Lidon 2).
His opponent, Alim Nabiyev, has an official record of 48-6-0 (20 knockouts) and he entered as the No.4 in the same weight class. He lost to Diogo Calado in 2016 but then he has won over Vladimír Moravcík, Yohan Lidon, Zhang Yang, Jimmy Vienot and Nieky Holzken (Nieky Holzken vs Alim Nabiev). Nabiev vs Doumbe is on the undercard of Badr Hari vs Hesdy Gerges 2 – Glory 51. Watch the video and rate this fight!