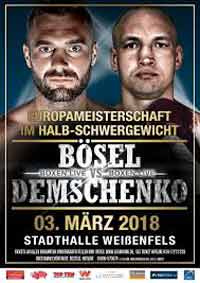 Review by AllTheBestFights.com: 2018-03-03, some good single shots between Dominic Boesel and Serhiy Demchenko but it is not enough to get three stars: it gets two.

Dominic Boesel entered this fight with a pro boxing record of 26-1-0 (10 knockouts) and he is ranked as the No.22 light heavyweight in the world. He fought four times in 2017 losing once, with Karo Murat (Dominic Boesel vs Karo Murat), after this bout he beat Robert Blazo and Alis Sijaric.
His opponent, Serhiy Demchenko, has a record of 18-11-1 (12 knockouts) and he entered as the No.47 in the same weight class. He lost two consecutive fights in 2016, against Mehdi Amar (Mehdi Amar vs Serhiy Demchenko 2) and Mickael Diallo, but he came back to win in 2017 defeating Bojan Radovic and Hakim Zoulikha. Boesel vs Demchenko is valid for the vacant EBU (European) light heavyweight title. Watch the video and rate this fight!