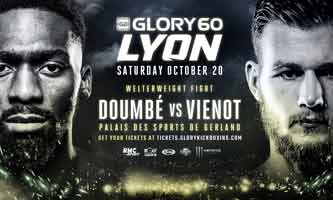 Review by AllTheBestFights.com: 2018-10-20, good fight between Cedric Doumbe and Jimmy Vienot: it gets three stars.

The former Glory Ww and WAKO Pro Mw champion Cedric Doumbe entered this fight with a pro kickboxing record of 69-7-1 (41 knockouts) and he is ranked as the No.4 super middleweight in the world. He has fought three times in 2018 losing to Alim Nabiev (Cedric Doumbe vs Alim Nabiev) but then he has beat Thongchai Sitsongpeenong (Cedric Doumbe vs Thongchai Sitsongpeenong) and Alan Scheinson (Cedric Doumbe vs Alan Scheinson).
His opponent, the former Wbc, Wpmf and current WMC world muay thai champ Jimmy Vienot (who replaces Harut Grigorian due to acute gastroenteritis that has forced him from the fight card), has a record of 61-15-0 (33 knockouts) and he entered as the No.16 in the same weight class. He has already fought eight times this year losing once, with Eyevan Danenberg, but then he has won over Noppakao, Sorgraw Petchyindee, Ivan Naccari and Wilson Varela. Doumbe vs Vienot is the main event of Glory 60. Watch the video and rate this fight!