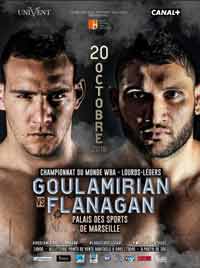 Review by AllTheBestFights.com: 2018-10-20, pretty good finish between Arsen Goulamirian and Mark Flanagan but it is not enough to get three stars: it gets two.

The undefeated interim Wba Cw champion Arsen Goulamirian entered this fight with a perfect boxing record of 23-0-0 (15 knockouts) and he is ranked as the No.17 cruiserweight in the world. In his last three bouts he has won over Mitch Williams, Hamilton Ventura and Ryad Merhy (Arsen Goulamirian vs Ryad Merhy).
His opponent, Mark Flanagan, has an official record of 24-5-0 (17 knockouts) and he entered as the No.38 in the same weight class. He lost to Denis Lebedev last year (Denis Lebedev vs Mark Flanagan) but then he has beat Pablo Matias Magrini and Mauricio Barragan. Goulamirian vs Flanagan is valid for the WBA World cruiserweight title. Watch the video and rate this fight!