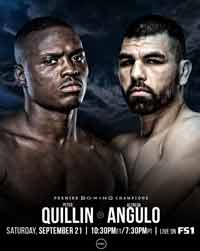 Review by AllTheBestFights.com: 2019-09-21, pretty good fight between Thomas Dulorme and Terrel Williams: it gets three stars.

Thomas Dulorme entered this fight with a professional record of 24-3-1 (16 knockouts) and he is ranked as the No.17 welterweight in the world. In his last three fights he has beat Brian Jones, has lost to Yordenis Ugas (Thomas Dulorme vs Yordenis Ugas) and has tied with Jessie Vargas (Jessie Vargas vs Thomas Dulorme).
His opponent, the undefeated Terrel Williams, has a perfect record of 18-0-0 (13 knockouts) and he entered as the No.87 in the same weight class. In his last three bouts he has won over Rosemberg Gomez, David Grayton and Justin DeLoach. Dulorme vs Williams is on the undercard of Peter Quillin vs Alfredo Angulo. Watch the video and rate this fight!