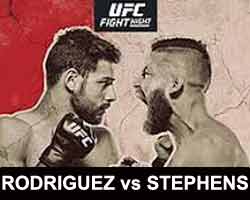 Review by AllTheBestFights.com: 2019-09-21, we hope to see a rematch between Yair Rodriguez and Jeremy Stephens: it gets two stars.

The black belt in tae-kwon-do and Tuf Latin America tournament winner Yair Rodriguez entered this fight with a professional mma record of 11-2-0 (55% finishing rate) and he is ranked as the No.27 featherweight in the world. ‘Pantera’ Rodriguez lost to Frankie Edgar in 2017 (Frankie Edgar vs Yair Rodriguez) but he came back to win against Chan Sung Jung in 2018 (4-stars fight, Chan Sung Jung vs Yair Rodriguez).
His opponent, Jeremy Stephens, has an official record of 28-16-0 (75% finishing rate) and he entered as the No.9 in the same weight class but he comes off two consecutive losses, against Jose Aldo (Jose Aldo vs Jeremy Stephens) and Zabit Magomedsharipov (Jeremy Stephens vs Zabit Magomedsharipov): before this bout, in 2018, he had beat Josh Emmett (Josh Emmett vs Jeremy Stephens). Rodriguez vs Stephens is the main event of UFC Fight Night 159 (UFC on ESPN+ 17). Watch the video and rate this fight!

Result: Click here to show the fight’s result
Yair Rodriguez vs Jeremy Stephens (No Contest accidental eye poke at 0:15, round 1)

Their next fight: Jeremy Stephens vs Yair Rodriguez 2