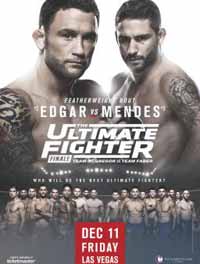 Review by AllTheBestFights.com: 2015-12-11, fight not so exciting between Joe Lauzon and Evan Dunham: it gets two stars.

Joe Lauzon entered this fight with a pro mma record of 25-10-0 (96% finishing rate) and he is ranked as the No.20 lightweight in the world. He has fought twice in 2015 losing to Al Iaquinta (=Lauzon vs Iaquinta) and defeating Takanori Gomi (=Lauzon vs Gomi).
His opponent, the black belt in Bjj Evan Dunham, has a record of 16-6-0 (56% finishing rate) and he entered as the No.25 in the same weight class. He suffered three consecutive losses between 2013 and 2014, the last one against Edson Barboza (=Barboza vs Dunham), but he came back to win in 2015 beating Rodrigo Damm and Ross Pearson (=Pearson vs Dunham). Lauzon vs Dunham is on the undercard of Frankie Edgar vs Chad Mendes – UFC Tuf 22 Finale. Watch the video and rate this fight!