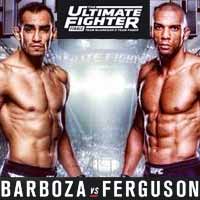 Review by AllTheBestFights.com: 2015-12-11, high pace and some very nice exchangesEdson Barboza vs Tony Ferguson is close to get four stars (UFC Fight of the Night and UFC Performance of the Night)!

The Tuf 13 tournament winner Tony Ferguson entered this fight with a professional mma record of 19-3-0 (79% finishing rate) and he is ranked as the No.5 lightweight in the world (currently the #1 in this division is Rafael dos Anjos). He suffered his last defeat in 2012 when he faced Michael Johnson, since then he has won six consecutive bouts beating Gleison Tibau (=Ferguson vs Tibau) and Josh Thomson in 2015 (=Thomson vs Ferguson),
His opponent, the black belt in tae-kwon-do Edson Barboza, has an official record of 16-3-0 (69% finishing rate) and he entered as the No.12 in the same weight class. He has also fought twice in 2015 losing to Michael Johnson (=Barboza vs Johnson) and winning over Paul Felder (=Barboza vs Felder). Ferguson vs Barboza is on the undercard of Frankie Edgar vs Chad Mendes – UFC Tuf 22 Finale. Watch the video and rate this fight!