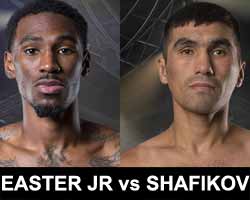 The undefeated Ibf Lw champion Robert Easter Jr entered this fight with a perfect boxing record of 19-0-0 (14 knockouts) and he is ranked as the No.3 lightweight in the world (currently the #1 in this division is Jorge Linares). He won the vacant Ibf title last year against Richard Commey (=Easter Jr vs Commey) and he defended it once in 2017 with Luis Cruz (=Easter vs Cruz).
His opponent, Denis Shafikov, has an official record of 38-2-1 (20 knockouts) and he entered as the No.9 in the same weight class. He lost to Rances Barthelemy in 2015 (=Barthelemy vs Shafikov) but then he has beat Jamel Herring (=Shafikov vs Herring) and Richard Commey (=Shafikov vs Commey). Robert Easter Jr vs Denis Shafikov is valid for the IBF World lightweight title (Easter’s second defense). Watch the video and rate this fight!