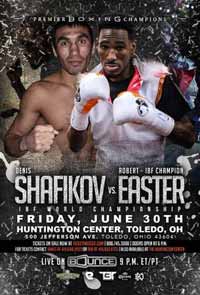 Review by AllTheBestFights.com: 2017-06-30, some good exchanges between Julian Williams and Joshua Conley but it is not enough to get three stars: it gets two.

Julian Williams entered this fight with a professional record of 22-1-1 (14 knockouts) and he is ranked as the No.9 super welterweight in the world (currently the #1 in this division is Erislandy Lara). He fought twice last year beating Marcello Matano (=Williams vs Matano) but then he suffered his first loss, against Jermall Charlo (=Charlo vs Williams).
His opponent, Joshua Conley, has a boxing record of 14-1-1 (9 knockouts) but he is not ranked as he hasn’t fought since March 5, 2016 when he defeated Adrian Arenas. Julian Williams vs Joshua Conley is on the undercard of Robert Easter Jr vs Denis Shafikov. Watch the video and rate this fight!