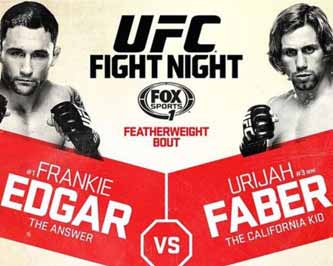 Review by AllTheBestFights.com: 2015-05-16, some good single shots between Frankie Edgar and Urijah Faber but it is not enough to get three stars: it gets two.

The black belt in Bjj and former Ufc Lw champion Frankie Edgar entered this fight with a professional mma record of 18-4-1 (50% finishing rate) and he is ranked as the No.2 fetherweight in the world. He suffered three consecutive defeats between 2012 and 2013, the last one against #1 Jose Aldo (=Aldo vs Edgar) but after this bout he came back to win beating Charles Oliveira (=Edgar vs Oliveira), BJ Penn (=Edgar vs Penn 3) and Cub Swanson (=Edgar vs Swanson).
His opponent, the former WEC Fw champion Urijah Faber, has an official record of 32-7-0 (81% finishing rate) and he entered as the No.3 bantamweight. He fought three times last year losing to Renan Barao (=Barao vs Faber 2) but then he has won over Alex Caceres (=Faber vs Caceres) and Francisco Rivera (=Faber vs Rivera); ‘The California Kid’ returns to the featherweight division in this bout. Edgar vs Faber is the main event of UFC Fight Night Manila – Ufc FN 66. Watch the video and rate this fight!