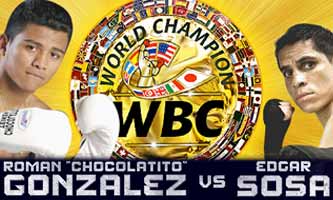 Review by AllTheBestFights.com: 2015-05-16, nice and tough exchanges between Roman Gonzalez and Edgar Sosa: it gets three stars.

The undefeated world champion in three different weight classes Roman Gonzalez entered this fight with a perfect boxing record of 42-0-0 (36 KOs=86%) and he is ranked as the No.1 flyweight in the world. He won the Wbc Flw belt in 2014, against Akira Yaegashi (=Yaegashi vs Gonzalez), and he successfully defended it once with Rocky Fuentes (=Gonzalez vs Fuentes); after this bout he beat also Valentin Leon but his title was not on the line (=Gonzalez vs Leon).
His opponent, the former Wbc light-Flw champion Edgar Sosa, has a record of 51-8-0 (30 knockouts) and he entered as the No.7 in the same weight class. He suffered his last loss in 2013 when he faced Akira Yaegashi (=Yaegashi vs Sosa); after losing he came back to win beating Omar Salado and Carlos Melo. ‘Chocolatito’ Gonzalez vs Sosa is valid for the WBC World flyweight title (Gonzalez’s second defense); undercard of Gennady Golovkin vs Willie Monroe Jr. Watch the video and rate this fight!