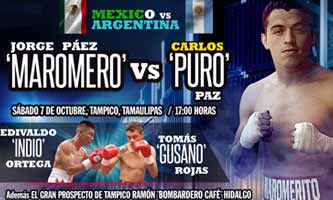 Review by AllTheBestFights.com: 2017-10-07, nice and tough fight between Edivaldo Ortega and Tomas Rojas: it gets three stars.

Edivaldo Ortega entered this fight with a professional boxing record of 24-1-1 (11 knockouts) and he is ranked as the No.23 super bantamweight in the world. ‘Indio’ Ortega fought three times last year beating Alexander Cazares and Juan Carlos Sanchez Jr (=Sanchez vs Ortega) but then he was defeated by Eduardo Ramirez.
His opponent, the former Wbc super-Flw champion Tomas Rojas, has an official record of 49-15-1 (33 knockouts) and he entered as the No.28 super featherweight. ‘Gusano’ Rojas has already fought twice in 2017 losing to Cristian Mijares (=Mijares vs Rojas 2) and winning over Jose Cifuentes. Edivaldo Ortega vs Tomas Rojas is on the undercard of Jorge Paez Jr vs Jose Carlos Paz. Watch the video and rate this fight!

(Free embeddable video hosted on Youtube and not uploaded by AllTheBestFights)
https://www.youtube.com/watch?v=cwJgtYI8w9o