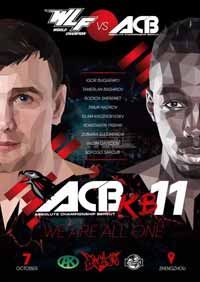 Review by AllTheBestFights.com: 2017-10-07, some good single shots but the fight between Sittichai Sitsongpeenong and Dzhabar Askerov was not so exciting: it gets two stars.

The 2014 Lumpinee Ww and current Glory Lw champion Sitthichai Sitsongpeenong entered this fight with a professional kickboxing record of 116-30-5 (31 knockouts) and he is ranked as the No.2 super welterweight in the world. He lost to #1 Superbon Banchamek last year (=Sitthichai vs Superbon 2) but then he has beat Marat Grigorian (=Sitthichai vs Grigorian 3), Dylan Salvador (=Sittichai vs Salvador 3), Hassan Toy and Enriko Kehl.
His opponent, the Wako-Pro and K-1 World GP champion Dzhabar Askerov (who replaces Chingiz Allazov), has an official record of 97-33-2 (48 knockouts) and he entered as the No.15 in the same weight class. He has fought three times in 2017 beating Rhassan Muhareb and Christopher Mena but then he has lost the WLF Yi Long challenge tournament semi-final with Chingiz Allazov (who should have faced Sittichai in the final). Sitthichai Sitsongpeenong vs Dzhabar Askerov is the final of Wu Lin Feng – Yi Long challenge tournament. Watch the video and rate this fight!