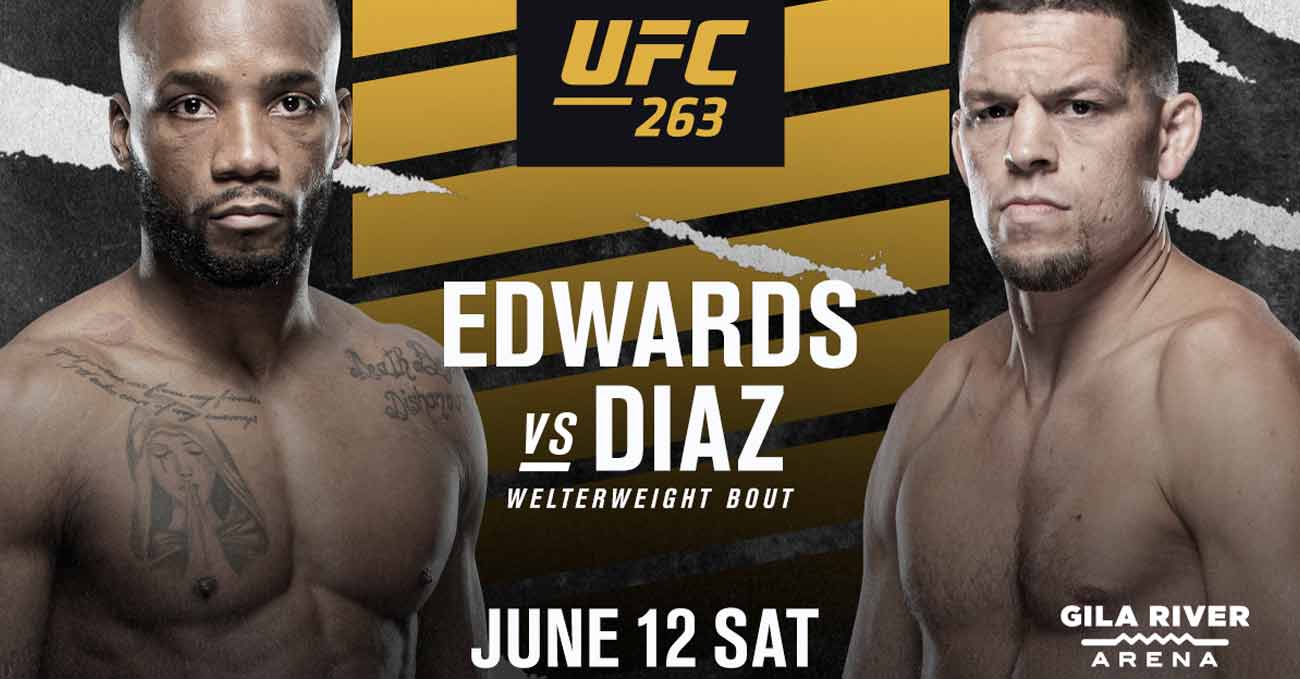 Review by AllTheBestFights.com: 2021-06-12, entertaining mma fight: Leon Edwards vs Nate Diaz gets three stars (take a look at our ranking of the Best Mma Fights of 2021).
Diaz vs Edwards is on the undercard of Israel Adesanya vs Marvin Vettori 2 – UFC 263. Watch the video and rate this fight!

Leon Edwards entered this fight with a pro record of 18-3-0 (50% finishing rate) and he is ranked as the No.10 welterweight in the world.
He suffered his last loss when he faced current #1 Ufc Ww champion Kamaru Usman in 2015, since then he has collected eight consecutive victories, the last one with Rafael dos Anjos (Rafael dos Anjos vs Leon Edwards), and one no-contest in 2021, with Belal Muhammad (Leon Edwards vs Belal Muhammad).

His opponent, the black belt in Brazilian jiu-jitsu and Tuf 5 Lw tournament winner Nate Diaz, has an official mma record of 20-12-0 (80% finishing rate) but he is not ranked as he hasn’t fought since November 2019.
He lost two out of his last three matches, the rematch with Conor McGregor in 2016 (bout ranked in the top 10 Users’ mma Fights of the Year 2016, Nate Diaz vs Conor McGregor II) and with Jorge Masvidal at the end of 2019 (Jorge Masvidal vs Nate Diaz); between these two bouts he beat Anthony Pettis (Anthony Pettis vs Nate Diaz).
Among the best fights of Diaz we also suggest the first match with Conor McGregor that we rated with four stars and it was also ranked in the top 10 Users’ mma Fights of the Year 2016: Conor McGregor vs Nate Diaz I.

Selection of the best videos about the fight Leon Edwards vs Nate Diaz. If you have seen the full fight you can rate it at the bottom of this post.